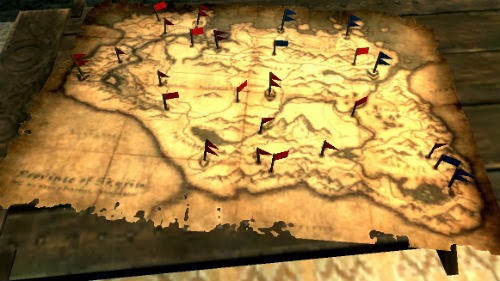 This is a fractal, system-agnostic structure for making the control of territory a gameable thing at your table.

Example: a thieves guild struggling for control of the city's criminal underworld.

Example: a lord's war to suppress the forces of chaos in his domain.

Example: a cult enforcing orthodoxy in its parishes.

You want something like this if you want domain-level play. Or if you want your dudes to be hustling to control territory (or whatever idiom you may be employing). And you want this kind of thing to drive play or at least be an optional focus of play.

Me? It's the point of the campaign I'm currently running. It's about a thieves guild trying to take over one particular city, pushing out all the competing criminal interests, and trying to insulate themselves from the law.

To incentivize, you could give XP for each territory held per cycle, or you could just say (as I'm doing), "The object of the game is to control the city."

I'm going to give boring but informative bullet points. But, before that, examples:

Example: the Krayeerb Krew just burned down Sandercot Provisions, and now their drug dealers are everywhere.

Example: well, since we assassinated the vicar, we're running the charity BBQ this year, and that'll give us enough good will to get away with it.

(OPTIONAL: When the cycle (of whatever length: day/week/hour/extended rest) comes up, you get the resources or suffer the vulnerabilities of the flags you hold. So, if the alchemist you're "protecting" comes up vulnerable this cycle, he's got nothing for you, and the explosion in his lab injures one of your low level gang members, but at least you still exert control the alchemist's neighborhood.)

The above is actually the hardest part. It's the skeleton that moves this whole thing. However you do the subsystems, it should still work. Nevertheless, more detail and examples:

Example: the party sees 6 Krayeerb Krew toughs getting high on the stoop outside the alchemist's (I'll name that shop in the moment, Phil's Philters or something). The party immediately goes medieval on them and stakes their heads up outside the block. The party's gang now has taken the flag and holds it for now.

Presumably you can come up with some procedure for challenging the the dominance of the party.

This Is Actually All You Need

You can fill out the rest from here. I'm going to do so for my own campaign. I'll post it when it's all gussied up as an example, but it's basically all busy work from here: