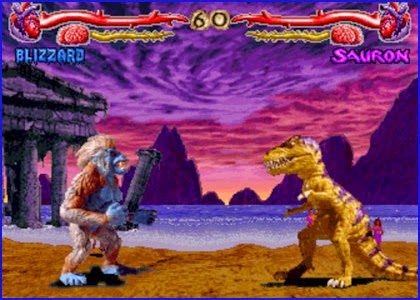 This is how I will do street fighting from now on amen.

These two have jumped into a cage match because that's the kind of thing that happens. GM sets the scene of course, laying out what the features are, how many panels are filled with spikes, what sort of tentacled beasts are bopping about, and who's tossing what over the cage from the stands. Fighters are circling. Trash talk may commence.

GM: It goes from bleeding to screaming to breaking to maiming, vegetative states, and killing. It starts at bleeding. Roll HD + level.

GM: Vorjan, how do you make him bleed?

Vorjan: I dunno, I hit him in the face with magic missle.

GM: *sigh* Seneca, how do you deal with that weaksauce and make Vorjan bleed instead?

Seneca: I duck under the missile and spear him into the cage and bash his head on it until his scalp is ripped up.

GM: better. Vorjan, do you give up or make him scream? You can give up by fainting, being beaten unconscious, trying to run, or whatever, I dunno, just shouting I give up! really loud.

Vorjan: of course I'm going to make him scream. I'm going to elbow him in the teeth and keep headbutting him until he looks funny.

[Vorjan rerolls 1d4 + 3 and gets a 5. Since that meets or exceeds his opponent's roll of 5, what Vorjan said happens.]

GM: okay so you do that. Seneca, do you give up or break him?

Seneca: I'm going to go all Bane on this wizard and pick him up and break his back on my knee.

GM: yeesh so you do. Vorjan. Your back is broken. You slide onto the floor beside him. All you can see is unicorns. What do you do? Do you maim, PVS, slash kill Seneca, or do you give up?

Vorjan: well, since I can't roll an 8 unless my die explodes, I guess I'm gonna call it there.

Seneca: I kick his head and collect the prize money.