These are 20 encounters for hexcrawling around Hoard of the Dragon Queen's sandbox map.

I'll give more on the actual procedures to use for hexcrawling later, in case you don't know, or in case you're not satisfied with your existing procedures, or in case you just think I know better. (I've never done a hexcrawl; why would you think that?!)

1) white knight->(obviously breathing, not looking up) in full plate->(dented, bloodstained, white, five-leafed flower with black eye and crimson petals) with buster sword->(red ribbon trailing from grip; detects as magic; 2d8 damage; he who takes it gains 10% of XP value to next level each time he takes chivalrous action) sitting against willow->("GRISTE EG' roughly carved in trunk above him) in fungal circle->(30' radius, red lengual bulbs with bright yellow flowers, spotted black, reaching up like five arms); AC 18; HD 12d8 (96); +8 2d8+4 x 3; S*C*; from long ago, cursed by the Cult of the Dragon; his love, the princess Yss, sacrificed to dragon; bound to tree to slay any people who approached the dragon's lair behind him; the lair still exists->(lead to dragon's lair—improvise or use one page dungeon); will eventually see someone who looks like Yss, is distant ancestor with heirloom of a crystal hound; he will break into tears and apologize to her; he must be persuaded to be in her presence, such is his guilt.

2) falling wizard Tarhiel falls from sky, dies. Wizard hat, wizard robes, whole deal. Has journal->(excited scrawls about new spell research, was mocked as a boy for his scrawniness; those jocks will surely be red-faced when they see him now!). Has two scrolls of jump secured in cases. If trained in Arcana, can learn and copy into spellbook a during downtime. Target jumps spell slot squared x 100' high. When cast as cantrip lets you double jump your normal jump height. If trained in athletics or acrobatics can double jump after wall jumping/running.

4) Serial killer alchemist. Marcion cooking in his portable lab. Gives good sample for free, makes you feel great, insta-full hp or max 1HD temp hp. Sells additional doses steeply and poisoned. If you check his lab, someone trained will recognize the deadly thanatuxor seed pods, their distinctive ozone smell and raisin-like appearance, gathered around lairs of green dragons or wherever pine trees are blighted, and someone who can touch him will detect the trace of ozone on his clothes.

5) Lost drake. Confused, scared drake->(azure with yellow neck frill, armored with rusted iron plates for AC as chain, '86' branded on left rear leg) wandered away from cult camp. Will warm to party of treated well and become loyal. No check if PC trained in animal handling and presents decent plan. Otherwise, make a reaction roll to see how drake responds.

6)  3 deserters from the cult. Concealed identities, normal but smell of sweat and fear. Have done very bad things. Not sorry about it, just don't want to die in increasingly dangerous raids. Have  telltale dragon-chaised goods in sacks. Total of 300gp. Want to be pointed to next town. Say they were captured by bandits and escaped.

7) Terrified refugees. Will run. Into trouble. The most vulnerable looks back with wide eyes but is pulled along by the strongest.

9) Pack of domesticated dogs, will follow.
10) Glas, blue dragon. Hide immediately, or he spots you. Presuming there's someplace to hide.
11) Cult on the move. Follow them to town/camp (50/50).
12) Elk-man. Hannibal. Fancy, mind-games. Wants to turn you into an elk-man as well. By getting you to murder and eat people. Being an elk-man of the woods is sweet, just ask.
13) 1d12 faction members (odd: returning to faction w cult activity intel; even: heading out to scout cult activity)
14) Bandits. Use this table.

15) Owlbear. Running from 12 zombies of level 5 Red Wizard of Thay, which should be revealed only once owlbear has run past PCs and they have has a minute to react. Wizard is Calabraxos, doing this for kicks, occupying nearby grave-mound; needs drake skins for spell research, will trade in potions, scrolls, castings, but not currency (too pedestrian).

18) Itinerant prophets of god of knowledge (Oghma in FR), will tell prophecy if given 1cp 1sp 1gp and spit in their palm when they ask. They smear sopha-powder mixed with your saliva on their tongue, freak out, and sing the prophecy. Reveal next random encounter. Or, if you tick them off, reveal breaking a leg or something. Then it happens. 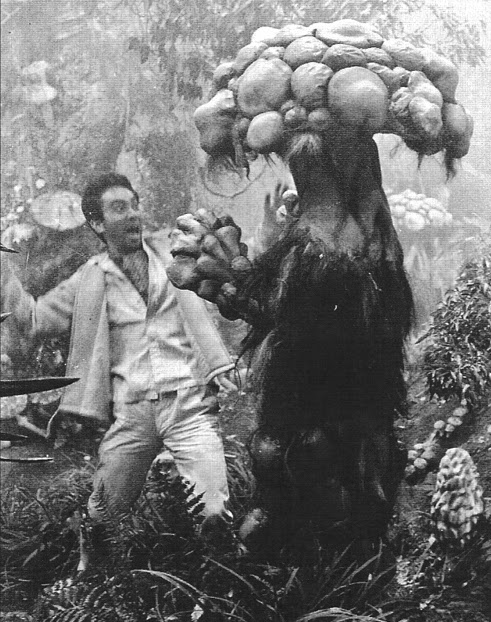 20) Birds circle, squawk. Earth starts to buckle slightly beneath them. Dull rumble, as of thunder afar off. Sink hole opens beneath in 30 seconds.