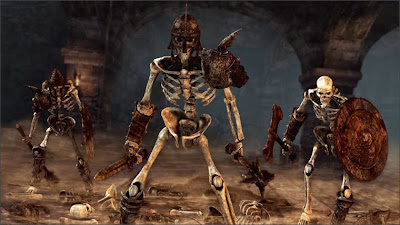 From this post, we extract these principles, with some revisions and additions:

RULES SUMMARY
Whenever you attack a creature, before you roll, just make sure we know who you're attacking and with what (e.g., keep using my sword, attacking the zombie in the funny hat).

When you hit a creature, roll and apply damage as normal.

When you hit without advantage, you may take control against them, providing you can think of some way in the fiction to do so that doesn't render the creature incapable of fighting.

When you hit with advantage or reduce a creature to 0 hp, what you intended to do to them happens.

When a creature attacks you, the GM makes it act against you at the current level of brutality (determined by the number of your death slashes). This is before any attack roll from the GM.

When a creature misses you, the GM will ask how you take control of the situation.

When a creature hits you, you lose hp as normal, mark a death slash, and the GM escalates the brutality of the fight.

When a creature hits you with advantage, you lose hp as normal and mark a death save failure (two death slashes), and the GM escalates the brutality of the fight.

When you hit zero hp, you fall, and we are agnostic about your fate (as long as you have less than 3 death save failures). The normal death save mechanic kicks in.

Whenever you use the environment to your advantage, the effects (however resolved) should bypass hit points and instead use your intent.

When you attack from range, resolve hp, etc. as usual. If you have advantage, you hit just where you intended. Otherwise on a hit, the GM says where you hit.

Here are the levels of brutality or escalation:
Note that, although this is written for 5e, it's really system agnostic. Tracking HP just possibly makes it more deadly.

If you read the previous post, you'll notice I've replaced the "seize advantage" verbiage with "take control". I feel it's clearer and less mechanical.

Say we've got three skeletons as in the picture above. We're fighting in an unlit tomb with pillars and coffins everywhere.

To keep things simple, I'm not going to use fancy powers and such. I'll give AC, hp, attack bonus, and damage in the statblocks and then update them as the fight goes on. I'll be using a dice roller and not fudging.

I'm making one change to the monster: instead of having skeletons be vulnerable to bludgeoning, I'm having them be resistant to slashing and immune to piercing. And you have to break their spines to kill them.

I'm worried for my party. I think they should have run. But maybe they've triggered a trap that keeps them locked in the tomb until the skeletons are dead. Let's run with that. Time for initiative. Skeletons are +2; my characters are +1 for fighter and +2 for wizard.

So that's it. In 5e, initiative order is static; so each round it will remain the same. Glad my wizard goes first :\

ROUND 1: FIGHT
Wizard: I'm shooting ray of frost at the dual-wielding one. [ROLL: natural 1]. Of course. You said there were pillars and sarcophagi around here, right? I'm going to go take cover behind one of those. 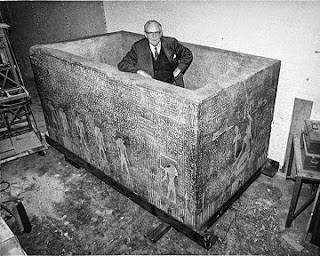 GM: The one with the mace is going around to get at the wizard, but the rest are converging on the fighter. We'll do the wizard first. You'll have cover for being behind the sarcophagus. [ROLL: natural 1 again]. So it swings and misses you, and chunks of marble are spraying everywhere; how do you take control?

Wizard: I'll reach out and freeze its hand to its mace, shatter them both on the lid of the sarcophagus, and kick it away from me.

[Notice that the player disarmed the skeleton and cut off its hand. That's fine. We don't care about the bodily integrity of the baddies. They are playgrounds of destruction, and the PCs are fragile as well. We don't need to carefully monitor things so that nothing awesome happens. Also note that the wizard will not have mechanical advantage against the skeleton because of this; he's just created distance and reduced the skeleton to unarmed damage. It's debuffing without having a power that tells you that you can debuff.]

GM: Cool, you do it. Now the other skeletons are coming up on the fighter. [DUAL WIELDER ROLLS TWICE: misses both times. AXE misses as well; fighter's AC is too good.] How do you take control?

[Notice I didn't even narrate the attacks of the skeletons at all. I'm not concerned about that. That they initiated an attack is assumed and will of course be incorporated into what the player says. If the player needs more info, they can just ask.]

Fighter: I'll block the dual wielder's attacks and shove him away while I break the knees of the other one with my mace. I want him on the ground when I attack him.

[Again, bodily destruction of the opposition is A-OK as long as they still might pose a threat.]

GM: your turn, fighter. [Previous action was just the fighter's response to the misses of the skeletons; now it's the fighter's turn proper.]

Fighter: I've got advantage, right? [Yes, he does.] I'm just going to stomp his skull with my boot.

GM: Okay, and go ahead and roll your mace's damage for this; I don't want to penalize you by making you do unarmed damage.

[Notice, though: the player doesn't know that delivering a headshot doesn't matter for these skeletons. Their spine must be broken or crushed. I don't let on, though.]

GM: Okay, you smash his skull; go ahead, wiz.

ROUND TWO
Wizard: I'm going to keep skirting around the sarcophagus and shooting at its legs. [Hit for 5 damage.] Okay, I hit it; so I'm freezing it to the floor, and the frost is spreading up its legs. 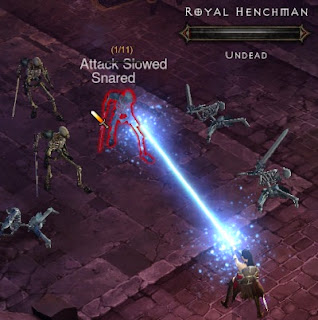 GM: I'm going to have the skeleton try to come at the wizard. [Makes a STR check to have it break free of the ice; fail]. But it can't; its leg is frozen into the ground, and it only manages to break its leg off—which means your ice isn't creeping up its body anymore, wiz. It's crawling toward you, but can't reach you yet.

GM: The dual wielding skeleton is coming at you, fighter. [I'm also going to use the now headless skeleton at the fighter's feet, but I'm not giving that away yet. It'll attack with advantage because the fighter doesn't know it's still a threat.]

[Dual wielder rolls, hits with the main hand, misses with the off hand. The other skeleton attacks with advantage: miss. Since at least one attack hits, we use the hit rules rather than the miss rules: 5 damage, two death slashes, escalating to bleeding. I don't know if the fighter would have noticed the attack of the skeleton on the ground; I see that he does NOT have Perception trained. So that will mean he doesn't notice the skeleton's bump against his greaves. If he had been wearing no armor on the legs, maybe I would have ruled differently.]

GM: The skeleton drives you back against a pillar, and you're just barely able to keep him off you, and then he brings down his mace onto your thigh, and you can feel the broken mail biting in. [Note: if we were using an armor repair / damage system, here's one way you can bring it in.] It's angling its sword to stab you right in the face; what do you do? [Transitioning to fighter's initiative count; I'm still judging that the fighter wouldn't notice the other skeleton rising and approaching.]

GM: Okay, how do you take control?

Fighter: I block the sword then smash its legs so it can't walk.

GM: You do, and then you notice [because the skeleton's not in the way anymore] the one whose skull you crushed advancing toward you. He's charging with the tip of his spine toward you.

ROUND THREE
Wizard: I'm going to try to freeze the headless one to the ground while running away from the one that's been fighting me; I'll circle around to try to get cover behind a pillar. Miss again!

GM: wizard, you see the skeleton who was chasing you crawling toward the torch, but he can't get in range of either of you yet.

[Now, for the other two. Since the fighter's legs are armored, I'm thinking the main threat is the charging skeleton, but the other skeleton on the ground might hold him in place. So that's the situation I'll present. I'll be at disadvantage to attack from the ground but not to grab; so I'll try a grab and an attack.]

GM: fighter, the charging skeleton is coming right for you, and you can see the skeleton whose legs you just smashed stirring at your feet.

[The dual wielder successfully grabs, but the charging skeleton misses by 1.]

GM: as the skeleton gets even closer, you can feel the other one's hand grab your ankle; you're grabbed. How do you take control of the situation?

Fighter: I brace for impact and shove the charging skeleton on its back, then turn and stomp the arm of the skeleton that's holding me, then jump on top of—

GM: That's enough. We'll start your initiative with your breaking free of the skeleton.

[There's an art to knowing what's too much for one take control.]

Fighter: Well, obviously crushing their skulls isn't enough; so maybe I need to crush the spine? I've already got advantage since he's prone; so that's what I'm gonna do, just bring it down straight through the ribcage onto the spine. Hit for 4 damage.

[Note that this brings the dual wielding skeleton down to 2 hp; but, since the fighter already had advantage, it's treated as if the creature were at 0 hp, which means he gets to do whatever he wants. Crushing the spine will indeed kill the creature.]

GM: that's what happens. You break through the spine, and you can feel the impact on the stone beneath, and sparks fly up off your mace [insert weapon breakage/degradation rules here]. It's not moving.

ROUND FOUR
Wizard: I want to keep running from the one that was originally attacking me and keep trying to freeze the one to the ground that's grabbing at the fighter. Hit for 8 damage.

GM: [noting that it takes the skeleton to 0 hp] you do freeze it in place and can finish it.

Wizard: Okay, I close my fist, and it shatters. 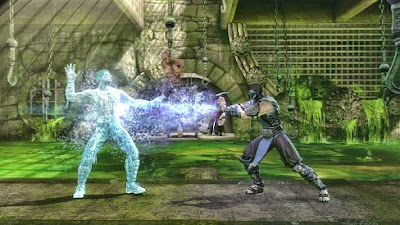 GM: [judging that the remaining one really isn't a threat]. The last skeleton can't move quickly enough to threaten y'all.

Fighter: Okay, I just break it's spine like the other one.

The fighter took one good hit to the leg, which broke some of his mail and caused bleeding. You can (and should I think) call in any subsystem you wish to handle this business. Maybe a surgeon needs to extract the broken links that might have been embedded in the flesh. Maybe it needs to be cauterized so there's no infection.

The wound is certainly painful but may not have any mechanical effects (at least not yet). If you wished, you could certainly implement such a system.

But, for those who are curious, that's an idea of how it would work.